More Money in Your Wallet with a 30 Taper Machine 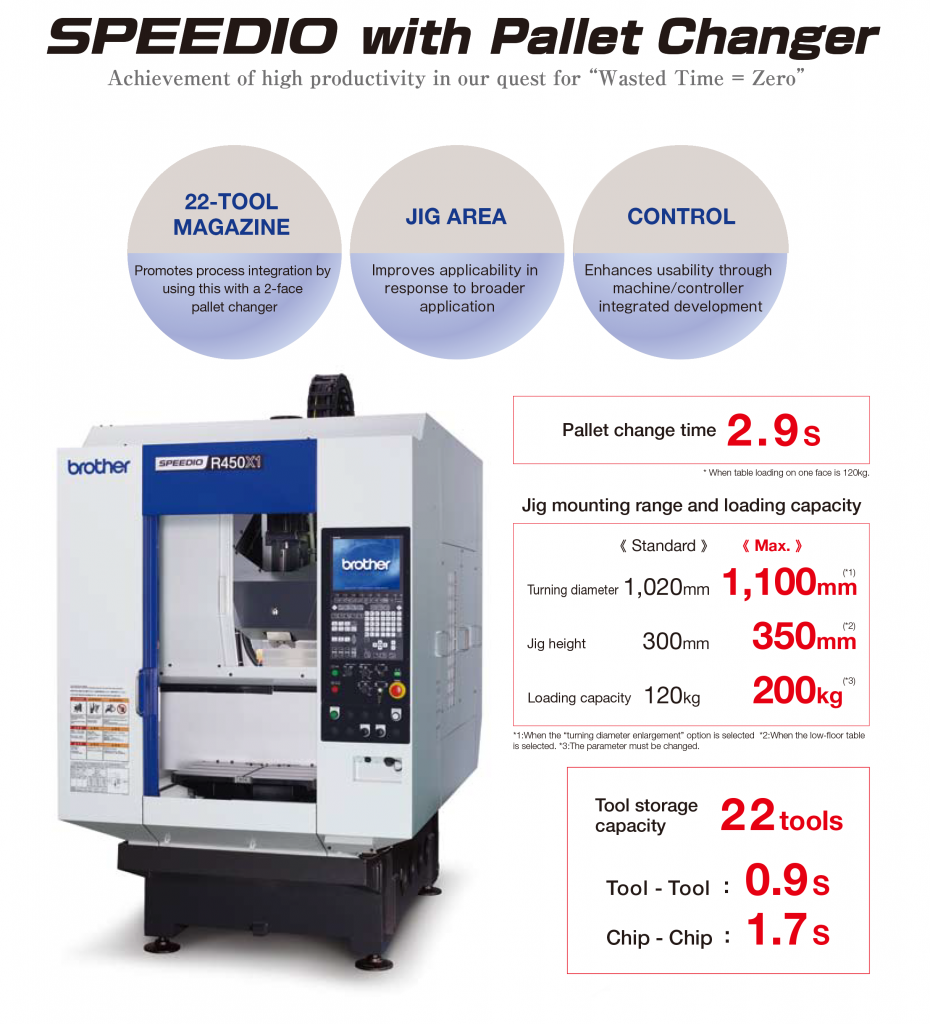 Your 40 taper is bigger and it can handle various sizes of parts. So, why would you want to purchase a 30 taper machine?
Scott’s response: We realized our parts didn’t need a 40 taper machine. Over the last few years, we’ve replaced twenty (20) of our larger machines with thirty (30) Brother SPEEDIO R450’s while using the same square footage of real estate. That gave us the capacity to add over 3 million dollars worth of new business. It’s dramatically affected our annual profit in a very good way. Watch Episode 1.

You’ve had your machines for years and they are paid for. Why would you want to purchase something new?
Scott’s response: As we started replacing our older machines, we found that the same programs would run 25% faster on a Brother SPEEDIO. Plus, we eliminated the load time with the pallet switching capability. Overall, we realized a 30% boost in productivity after switching over to Brother. Watch Episode 2.

You don’t do high volume, so the cycle times on your larger machines aren’t a big deal. Why make more of an investment in equipment?
Scott’s response: Because of the speed and efficiency of the Brother Machines, our on-time delivery shot up to over 96%. We were able to hit our customers shorter lead times and that created opportunities to win new business. Watch Episode 3.

You can’t change the price of electricity, and you need it to run your equipment. Wouldn’t you like to reduce your energy bill if you could?
Scott’s response: Our energy cost running thirty (30) Brother SPEEDIO machines is the same now as it was when we were running just twenty (20) larger 40 taper machines. That was an un-expected bonus we realized after switching over to Brother. Watch Episode 4.

Your workforce is a creature of habit, and they are comfortable with the equipment they work on. Why introduce something new?
Scott’s response: When we announced to our team that we were going in the Brother direction, there was some hesitation and a little resistance. When we explained that more productivity would lead to more job security and more pay, they got on-board. Watch Episode 5.

You like to purchase your machines from a company that has a fleet of repair vans and spare parts in case the machine goes down. Wouldn’t you rather purchase a more reliable machine?
Scott’s response: The maintenance and repair bills on our thirty SPEEDIO machines is less than half of what it was when we were running just twenty of the larger machines. It’s crazy. These SPEEDIO machines just do not break. And we run them 20 hours a day, 5 days a week. Watch Episode 6.

You only buy CNC machines from one machine company because you have been using them for years and they get the job done. The question is, are they doing it efficiently?
Scott’s response: Five years ago, we were very committed to another brand of CNC. We mistakenly thought the 30 taper machines just wouldn’t hold up, and boy were we wrong. Then we finally decided to try the Brother SPEEDIO, it was the best decision we ever made — and our shop is more profitable now than it’s ever been. Watch Episode 7.

If someone told you that you could produce your parts faster with better quality, while allowing you to be more productive and profitable with a very reliable machine thats saves you floor space and energy — wouldn’t you be interested?
Scott’s response: Take it from me, it’s easy to get distracted by endless technical specifications. Not all 30 taper machines are created equal. When we started focusing on what really matters — the shop’s productivity — the decision to invest in the Brother SPEEDIO was a no-brainer. Watch Episode 8.

Compact yet powerful, Brother SPEEDIO. It’s the EVERY Shop Machine.

Montague Manufacturing is located in Michigan. They are a full-service provider of precision machined components for the automotive, aerospace, military & defense, electrical control and other industries. Their facility is set up to handle small quantities as well as large scale production volumes. In addition to precision machining components, Montague Manufacturing can coordinate all other necessary services such as plating, grinding, laser etching, heat treating, anodizing and vibratory de-burring operations. With their state-of- the-art CNC milling and turning equipment, as well as a full engineering and design team, they can handle all of your part production needs.

Brother SPEEDIO features a line-up of 30 taper machines that can achieve high productivity, high cutting performance that are environmentally friendly, on small to medium and large parts, in various part applications, for numerous industries.

Yamazen is an importer and distributor of high-performance CNC machine tools and equipment. We have a broad line-up of tools, equipment and automation for all your machining needs. Being connected to an extensive industry network of application experts, we can provide you with a wide range of options and the most advanced techniques for your most productive solution. And with strong relationships with our builder partners, it allows us to keep machines and parts well-stocked so you can get your solution installed and running right away.